Here’s an article from the Sussex ccc website about Ed, who’s been signed on loan by Sussex and is in today’s squad to play Middlesex at Lord’s.  He follows on from the success enjoyed by Jonny Tattersall this season, as former Knaresborough Juniors making their way in the County game. 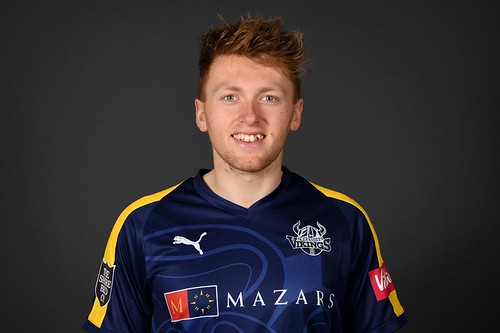 Yorkshire bowling allrounder, Ed Barnes, has joined Sussex on loan. He will be available for the remainder of the team’s Royal London One-Day Cup campaign.

The 21-year-old right-arm seamer from York has yet to make his first-team debut for the White Rose county but has made 51 appearances for their 2nd XI, taking 54 wickets and scoring three half-centuries.

Commenting on Barnes’ arrival at The 1st Central County Ground, Sussex head coach Jason Gillespie said: “With Ollie Robinson and Will Sheffield injured and Chris Jordan and Jofra Archer now with England, we had to look for some back-up for our bowlers.

“Eddie was available for a loan spell, and I know him from when he was on the academy during my time at Yorkshire, so we snapped him up.

“Eddie has come through the age groups at Yorkshire and been in and around the senior squad for a few years now. He’s a talented bowler who can also bat, as well as being a lovely lad who I am sure will fit in in our dressing room here at Sussex.”

Barnes himself said: “It’s all happened so quickly that I don’t think it’s quite sunk in yet to be honest! But I’m sure when I get to meet the lads on Friday and can get cracking I think I’ll soon settle in.

“I’ve already been welcomed in by a few of the lads which is really nice, and I’ve heard great things about this squad. I’ve been following them closely and they’ve played a great brand of cricket so I’m really excited to have been given this opportunity to come and play for Sussex and it was one I wasn’t going to let pass me by.

“They’ve got off to a good start with two wins and a loss so it’s all to play for. I really hope I can contribute to getting the team as far as possible in this competition.

“I feel at the moment I’m a better white ball player. It’s something that I’ve been working hard on in the winter and I’ve had a good start to the summer so I just hope I can keep it going and show people that I’m capable of playing at this level week in week out.”