The 2016 Duck Race (which was cancelled on New Year’s Day) took place on Sunday 28th February starting from the usual point on the high bridge. Due to the glorious weather we had a fantastic number of people there to watch the race. The ducks took a record long time and only began to make it over the finish line after 1 hour due to the calm conditions of the river.

Once again this was a successful event raising over £5,000 for good causes and Knaresborough Cricket Club greatly appreciates everyone’s support.

The corporate winners were: 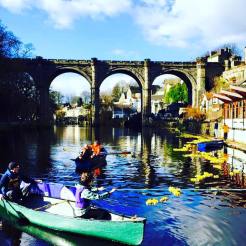