On Thursday the Under 17s won the Arthur Barrett cup for the fourth year in a row.  Harrogate won the toss and elected to field.  After the early loss of captain Sam Davies, Ed Barnes was joined by Ben Cutts.  They put on 67 before Ben was caught for 17.  Eddie was then out for 63 before George Davies added a quick 30 to take our total to 132-6, a score that seemed a bit below par for a good wicket.  Will Parker was the pick of the Harrogate bowlers with 2-15.

Harrogate got off to a quick start and although all the top order batsmen got to double figures they steadily lost wickets and fell behind the run rate.  Parker added a quick 34, but fell to Ed Barnes and they ended on 112-5.  Ed who finished with 2-14 off 6 overs to go with his 63 was awarded the Man of the match trophy. He then had to rush off and join the North of England squad for this years Bunbury Festival.  Well done to all the players that have represented the team this year. 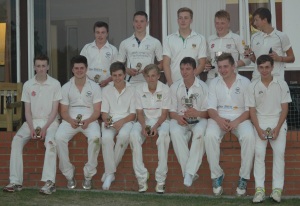